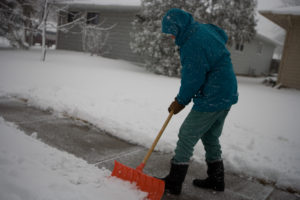 What compares with an intact white landscape? It brings out a sense of calmness, nobility, and elegance. But it also hides several dangers. It’s not just the frustration when you can’t get the car out! It’s also your own safety and local guidelines which make snow removal a must.

Remove snow or pay the fine

Did you know that failure to remove snow from your property could result in a $125 fine in Toronto? According to the snow removal Toronto regulations, each property owner must clear all steps, pathways, driveways, ramps, and sideways within 24 hours after a snowfall. Does this means you should get your shovel ready? Hmm, not quite! Property maintenance during such harsh weather is not easy. 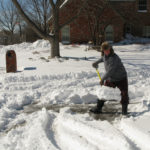 With snowflakes reaching up to a few inches in height and with the cold weather freezing up the landscape, it’s really difficult to shovel the icy snow. And it gets even harder when you lack the time, have back aches, or are elderly. But it is still important to remove snow and spread salt or even some sand to make driveways and walkways less slippery. Pros have different size plowing vehicles for efficient snow removal and salting. And with the clock ticking, this is actually your best choice.

Why snow removal is vital

So why is snow removal essential? Is this a neighborly gesture? Is it an endeavor to give the best example to your kids? Perhaps they are both good reasons for snow removal, but not the only ones.

Snow gets icy when it’s frozen. And someone might easily slip especially during the wee hours when the day begins. Kids can break their legs and you might slip with your car.

· Isn’t it important to come and go with no difficulties?

If your driveway is filled with snow, you won’t get the car out. The garage door might not open. And even if it does, you won’t be able to drive out if snow blocks your way. But even if you shovel snow to the side, it might be slippery. That’s why salting services are equally important. The alternative is not to go to work. Can you do that?

· Do you want to pay the fine?

When there are regulations, they must be followed. They have a reason for existing. You are not fined by the city just because you don’t play by the rules, but because you don’t take measures to prevent the inevitable. What’s that? Someone might slip. And when people fall due to other people’s negligence, they sue. Who wants to be sued?

One more thing to keep in mind: 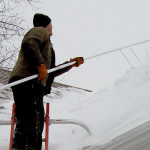 Removing snow from the roof and the garden is also important. In a different case, you might be faced with disasters. Let us elaborate:

· In the case of roofs, average ones can handle up to 20 pounds per sq.ft. which is equivalent to about 48 inches of new snow according to the Insurance Institute for Business & Home Safety. That means with heavy snowfall, the limit could be exceeded and the roof could collapse. And although your roof might be stronger and able to resist a larger amount of snow, why take chances?

· As for your garden, snow actually protects the lawn and bushes since it creates an insulated blanket and provides the moisture all plants need. But not all tree branches get withstand the extra weight and might break. Even if nobody stands underneath, they might break a window.